Harbhajan Singh, a teacher at the Coast Teacher Training College is playing the name part in the forthcoming production of James Elroy Flecker’s famous play “Hassan” at the Little Theatre Club. Mr. Singh has worked with Joseph Clement, the producer of “Hassan”, who is principal of the college, in many previousproductions at the National Theatre in Nairobi. This collaboration started with “Lady Precious Stream” in 1953 and continued with “Kismet” (which has since been made into a very successful musical) and the Chinese detective thriller “Murder Will Speak”.

In 1955 Harbhajan Singh won the James Master award in the senior section of the Kenya Musical Festival elocution competition, and in the same year was awarded the prize for the best actor for his performance as the Storyteller in Joseph Clement’s production of “The Singing Maid” in the Kenya Drama Competition.

In 1957 he played the name part in the same producer’s entry for the Drama Festival – Andre Obey’s “Noah”, which won more awards than have ever have been won by a competing team in the Kenya Drama Festival.

In “Hassan” Harbhajan Singh is playing his favourite part in his producer’s favourite play, so Mombasa audiences can look forward to an exciting combination.

James Elroy Flecker – dreamer, romantic, poet and would-be dramatist – fought a desperate losing battle against death to complete the manuscript of his first work for the stage – “The Golden Journey to Samarkand.”

The fight ended in 1915 when, while in the final stages of revising his epic in collaboration with Basil Dean, he died. Behind him he left an unfinished work that was not to be produced until nearly ten years later after being completed by Basil Dean. The work became “Hassan” an ill-formed extravaganza with a gap in it – a “broken back” as Dean himself put it – and an accompanying mellifluous musical score written specially by Frederick Delius.

COSTUMES
But despite the structural flaws, it has retained Flecker’s colour, wit, passion, his alternation of merriment and tragedy and the strange beauty of his rhythmic writing. This then is the background to “Hassan”, which Joseph Clement presents at the Little Theatre Club this and next week. Let it be said straightaway that with these facts before him any producer who takes on the play with all its lavish costumes, settings, weird lighting effects and its exacting demands on the actors themselves because of the complicated dialogue, is a very brave man. Mr. Clement earns that honour. He has faced and accepted all the intricacies that the play demands and has come up with a feast for the eye and the ear. It can be safely said that despite the mishaps of the first night, with its long scene changes and indeterminate use of the Delius’s music, the early curtains and back-stage hammerings, this was an achievement.

MAGNIFICENT
Combining members of the Little Theatre Club group and the Coast Teacher College in a cast of 50. He has made a worthwhile attempt. Newcomer Roy Spendlove, as the cold, ruthless Caliph of Bagdad, looks magnificent, speaks his lines with an icy clarity and used his face. Habhajan Singh in the more exacting role of Hassan shared the honours with a performance that had the right proportions of pathos and humour. Others worthy of special mention are Neil Brierley as Ishak the introspective poet and Jeremy Woods and Wendy Spendlove as the lovers Rafi and Pervaneh. The costumes are truly sumptuous and credit must go to Philip Boucher and college students under Mrs. Ida Pires. Mr. Boucher designed them and filled one handsomely in the funniest role of the evening as the blustering police chief.
C. G.

“Hassan” is the story of an humble confectioner who, unfortunately, falls in love with a wrong woman and then he gets caught into circumstances which make him realise the truth of the belief that favours of a women are uncertain and unreliable and even more uncertain and unreliable and even more dangerous are favours and promises of a king. The drama is all in English poetry and the most impressive point of the whole thing is the excellent elocution of the Asian personnel taking part in it.

Asian pronunciation of English usually lacks a lot of things, but here it was difficult to find whether the speaker was European or Asian. Scenario, costumes, direction etc were all impressive and excellent and parts were well-chosen. Harbhajan Singh as ‘Hassan’ carried a heavy burden which he discharged entirely to his credit and to the satisfaction of the audience. So also did Roy Spendlove as Khalif, Betty Sagar as Yasmin with whom Hassan falls in love, Abbas Parker as leader of the Beggars, and others taking minor parts. “Hassan” has been produced by Mr. Joseph Clement. Kenya Daily Mail congratulated the Producer, Director and all others taking part in the Drama for their excellent presentation. Above all it congratulates the individual who conceived the idea of this “combined operation” and the Club for carrying it out in such a spirit of enthusiasm and comradery.

“HASSAN” by James Elroy Flecker, is a spectacular play and judged by most standards is an ambitious undertaking for a producer with its cast of over 40 and 10 scene changes. Joseph Clement appears to have hurdled these difficulties with ease and given Mombasa a play that has been well described locally as “a feast for eye and ear”. Simple but ingenious sets made for quick scene changing and left the stage clear for the truly magnificent costumes designed by Philip Boucher and made by students and ex-students of the Coast Teachers’ Training College under Mr. Ida Pires. The lighting effects were skillful and the music appropriate. With all this was a valiant and well trained cast composed of members of the Little Theatre Club and the coast Teachers Training College.

The story, based on some old Turkish tales, concerns Hassan, a confectioner in Baghdad. The Caliph, Haroun-al-Raschid is in the habit of wandering about his city after dark in search of novelty and adventure and Hassan rescues him one night from a perilous situation. In return he is made the Caliph’s favourite and showered with riches and introduced to the splendours of the court. He is soon, however, disillusioned by the Caliph’s cruelty.

To rescue a beautiful maid, Parveneh, from the harem Rafi, the King of the Beggars, plans a rising of the beggars of Baghdad. The plan fails and Rafi and his beloved are to be punished. The Caliph leaves it to them to make a fateful choice. He offers them their lives but separation for ever or a day of love and then death together in torment. They choose death – and Hassan for denouncing the Caliph’s judgement is stripped of his newly won fortune and made to watch the lovers’ execution. Sickened Hassan with his friend Ishak, the poet, seek peace by making the pilgrimage of the “Golden Road to Samarkand”.

It would be impossible to name all the cast individually but Harbhajan Singh’s interpretation of Hassan was outstanding. Roy Spendlove was a cold and ruthless Caliph, Oscar Fernandes a fiery Captain of the Guard, Betty Sagar fulfilled the promise of her earlier and first appearance in “The Reluctant Debutante” and gave a provocative performance as Yasmin. Neil Brierley as Ishak spoke beautifully and the parts of the tragic lovers Rafi and Pervaneh were well played by Jeremy Wood and Wendy Spendlove. 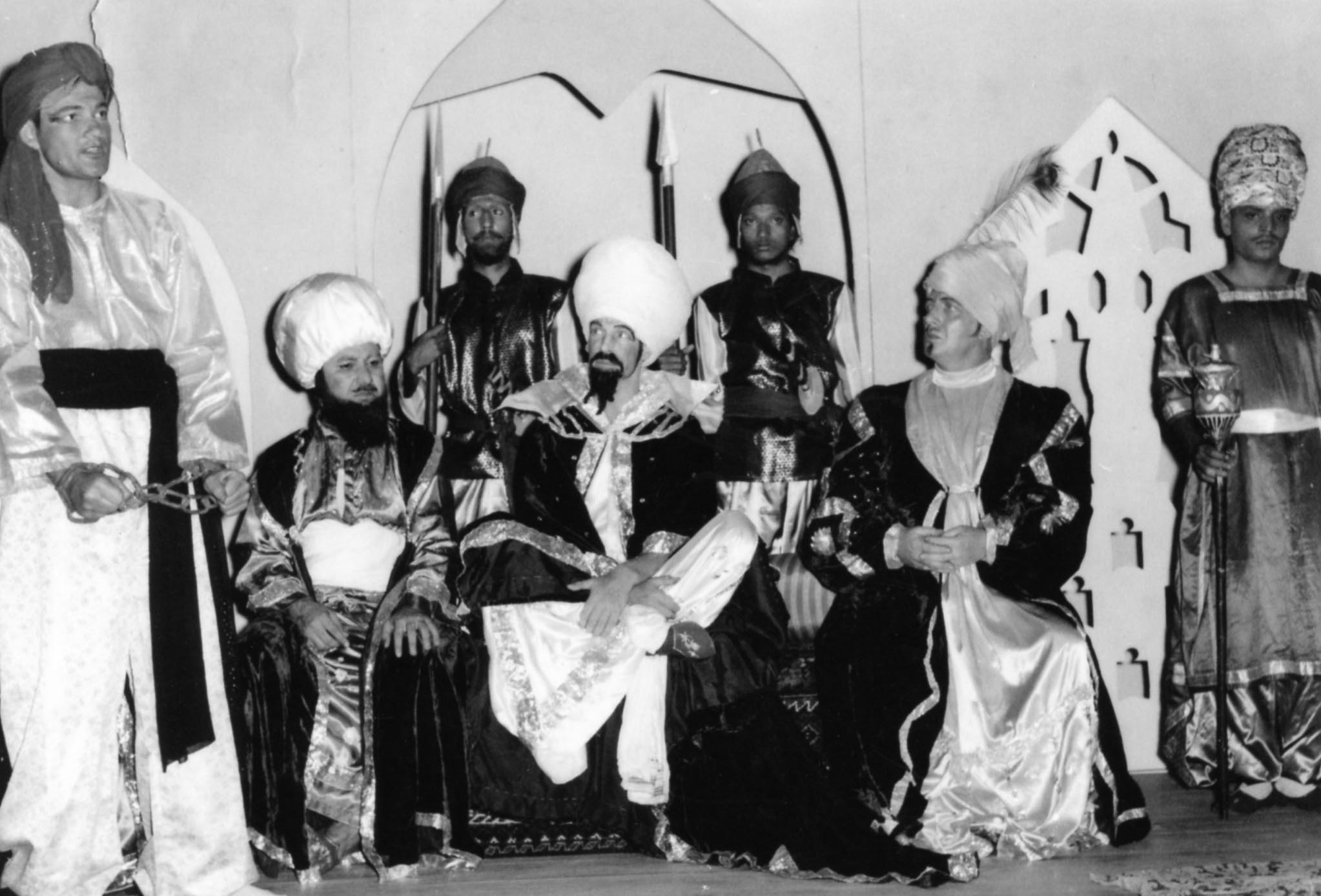 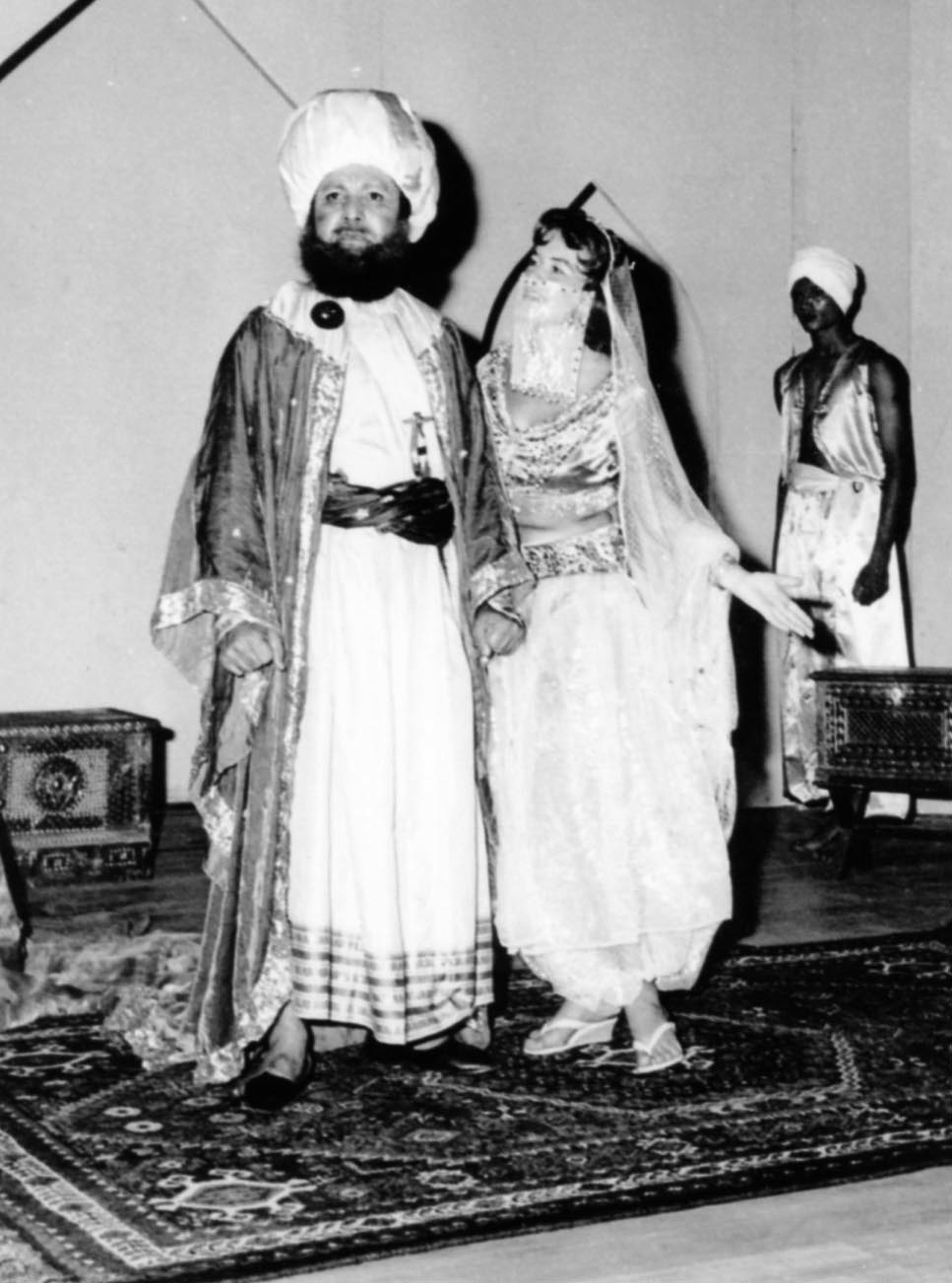 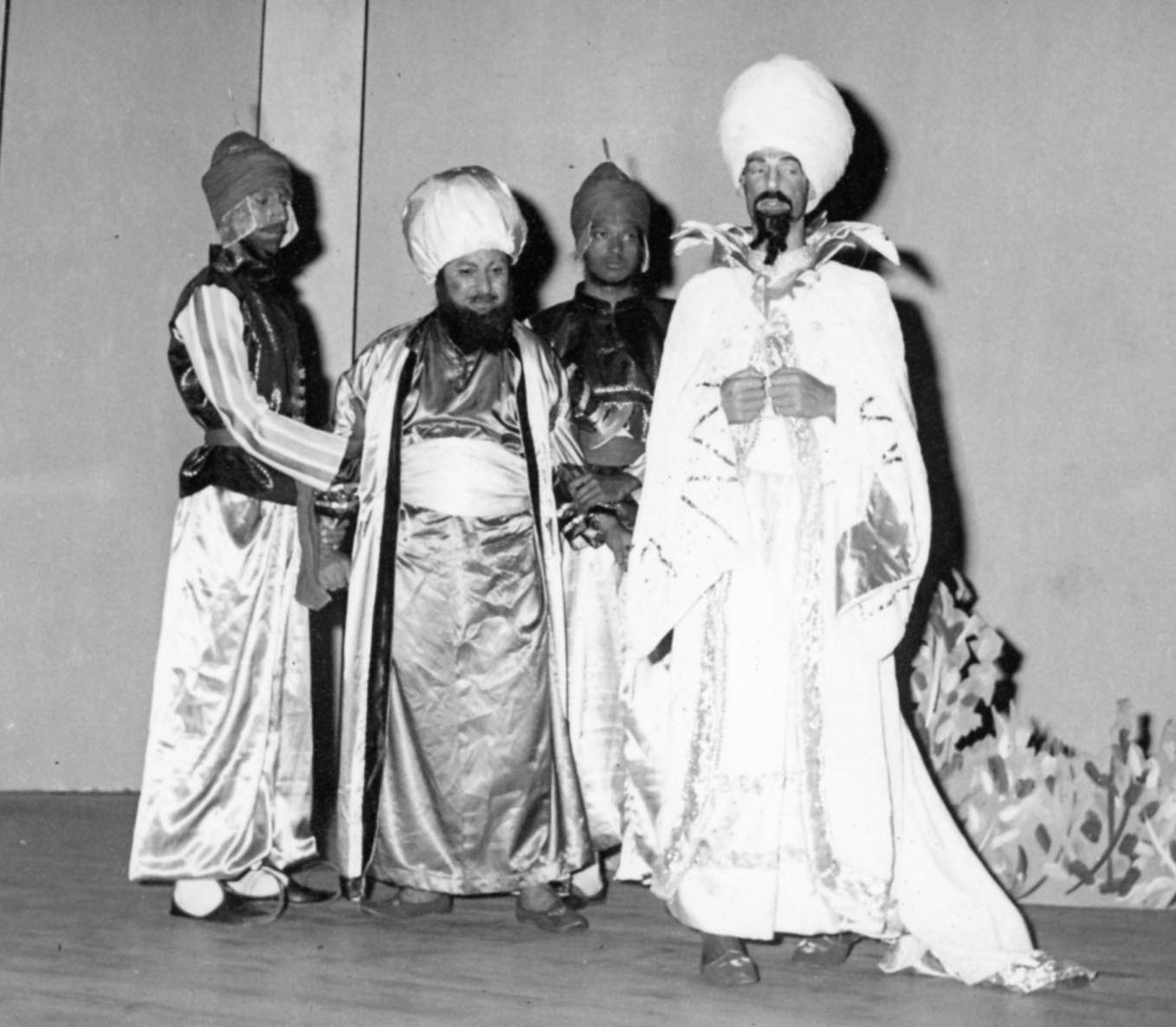 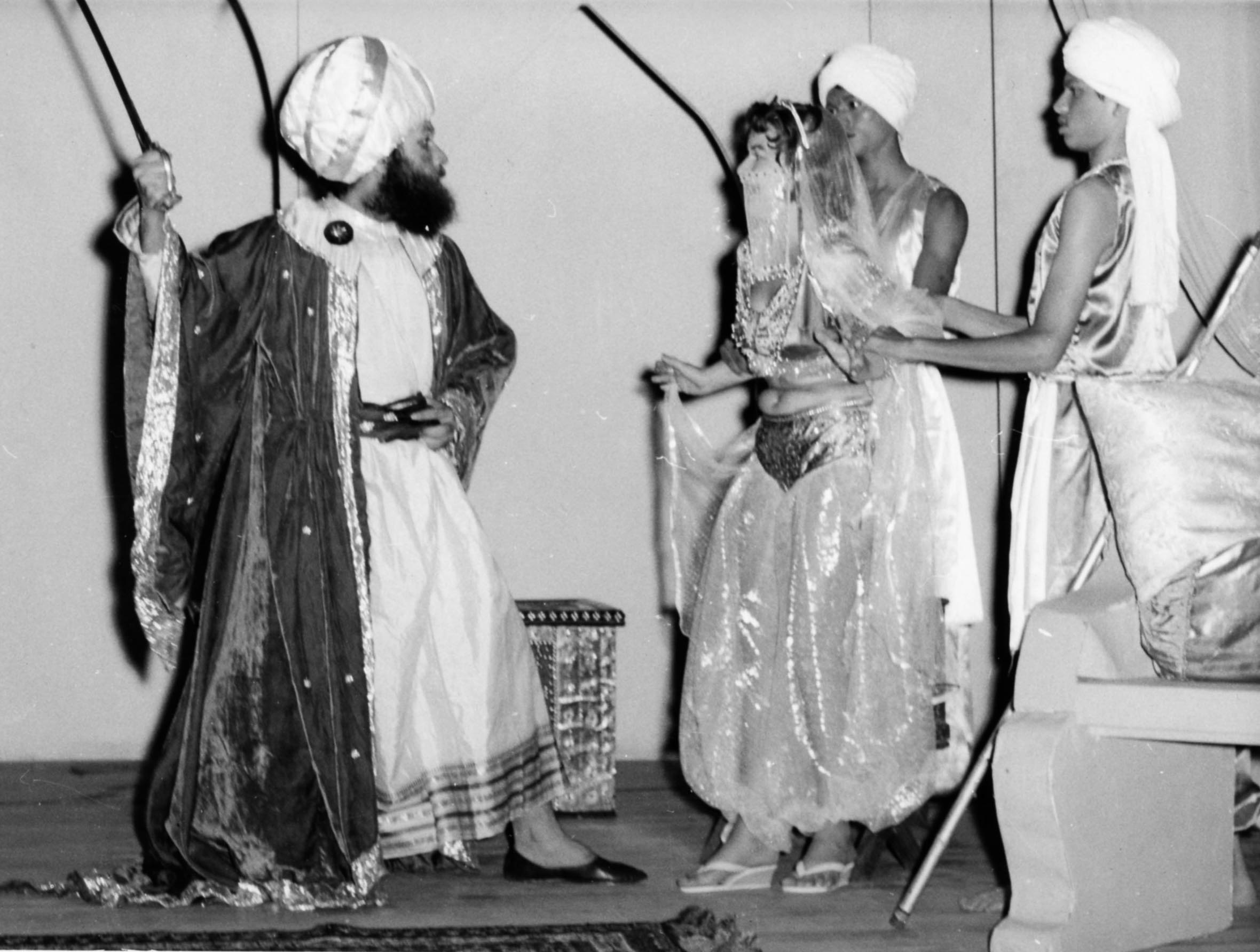 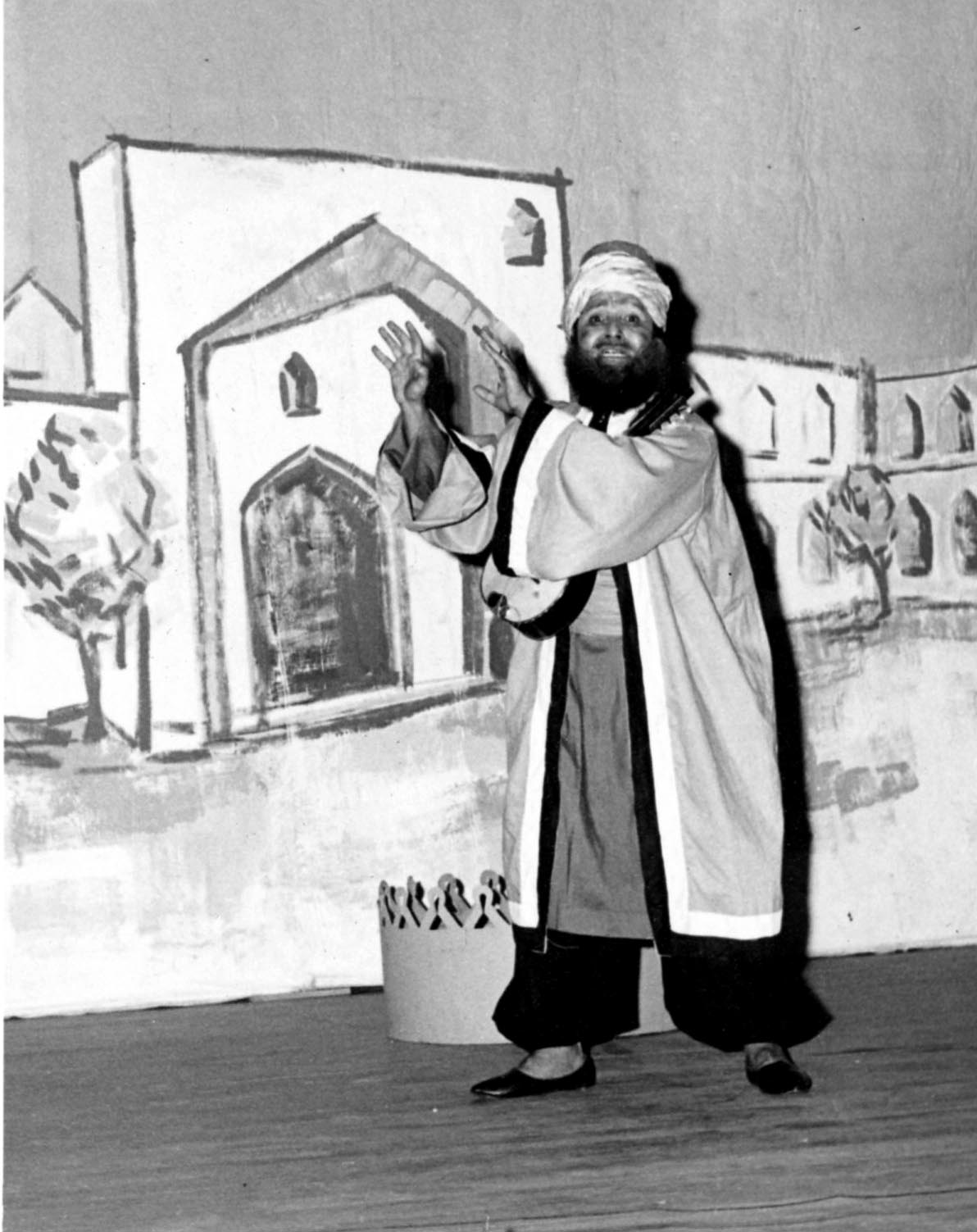 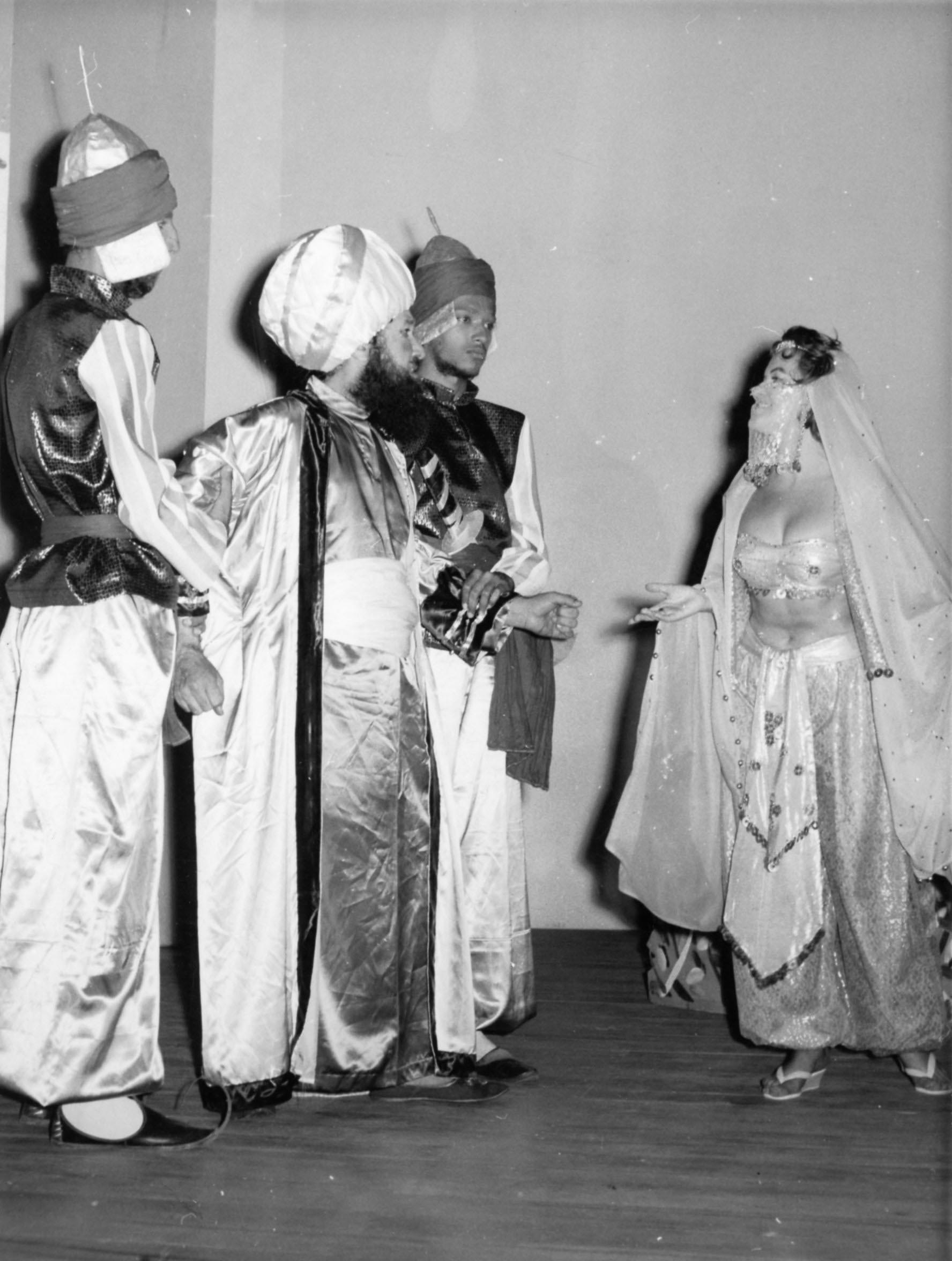 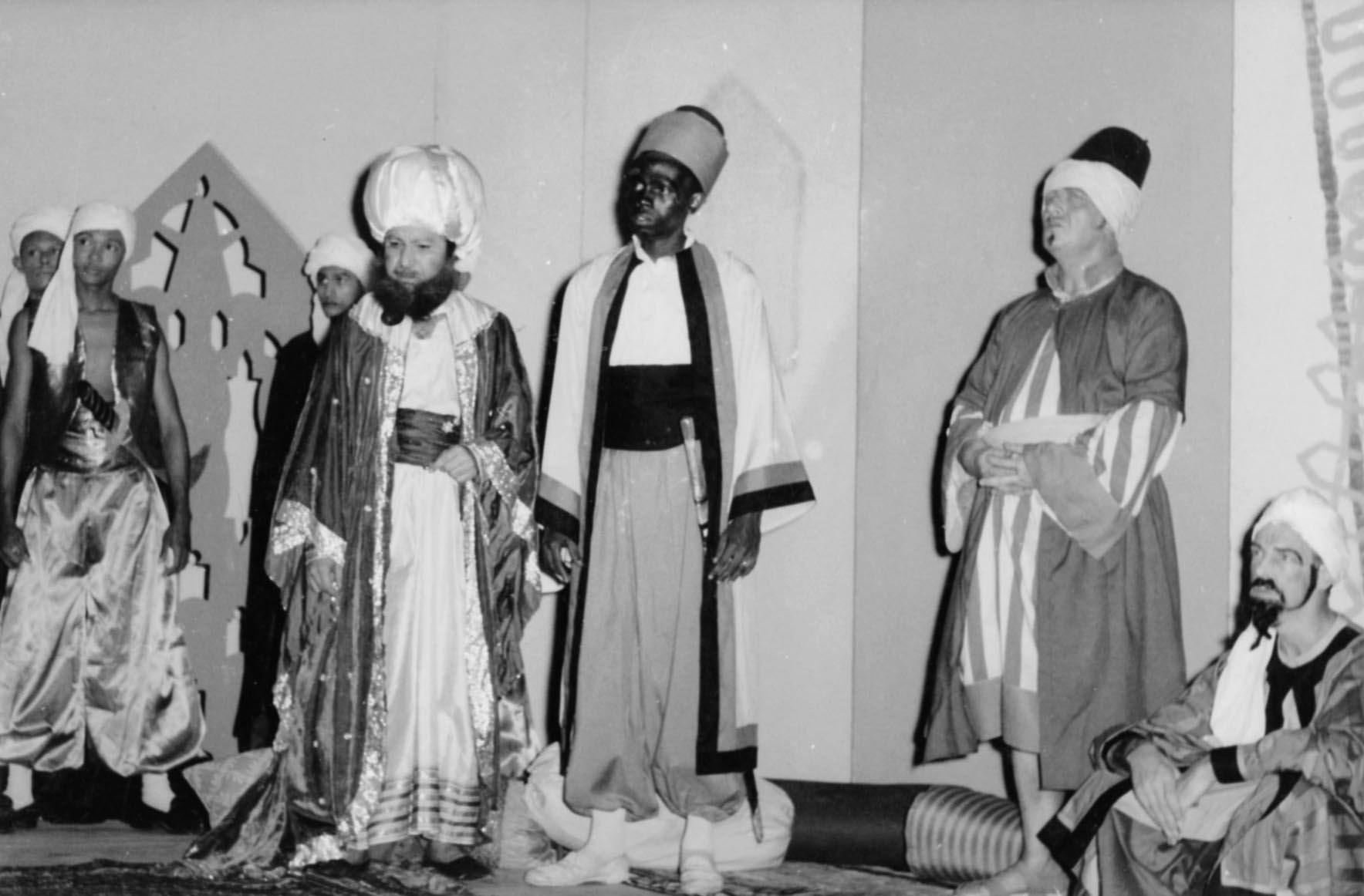