The picture on this page shows Harbhajan Singh as Judge Dee, the brilliant 13th century Chinese detective, the central character of the play Murder Will Speak, which opens at the National Theatre tomorrow night. Judge Dee used supernatural means to help him solve mysteries as well as the more orthodox methods of investigation. Chinese law demands a confession from the murderer before sentence can be passed, and Murder Will Speak reveals the measures Judge Dee has to use to extract confessions from the suspects.

Harbhajan Singh will be remembered by many theatregoers for his fine characterisations in Lady Precious Stream, Kismet and more recently, for the part in The Singing Maid which won him the award for the best performance by a man in the 1955 Drama Festival. Playing with Harbhajan Singh in the important roles of the widow, the student and the professor are Evelyn D’Souza, Sapal Wankadia and Ram Maini.

Rehersals for Joseph Clement’s production of this exciting Chinese detective thriller are now well advanced and the elaborate set is taking shape. Joyce Clement and Eileen Holman are working hard to make the costumes for this play a really brilliant display of colour while preserving their authenticity. Original paintings of the Manchu period were used in the design of costumes and they should add greatly to the colourfulness and excitement of the play.

The more macabre aspects of the play are being attended to by Erik Woodham who is making the death masks. The set will probably be the most elaborate ever seen on the Nairobi stage and the final scene of the play which is set in the Court of the Demon Judge of the Nether World will provide a thrill quite unlike anything else we have had in Nairobi. The important part of the Widow Fang around whom the mystery centres is played by Evelyn D’Souza, who has acted for Joe Clement before in his production of “Lady Precious Stream” and “The Singing Maid”. Many people will remember these productions with pleasure and can be sure of an exciting theatrical experience when “Murder Will Speak” opens at the National Theatre next Saturday.

Nairobi theatregoers can expect something really unusual and exciting when Joseph Clement presents the Chinese detective thriller “Murder Will Speak” next month at the National Theatre. The central character Judge Dee, the Chinese Sherlock Holmes, who becomes involved with Chinese devil masks, corpses and disembodied spirits in his efforts to solve the murder of Bee Sun. Judge Dee is being played by Habhajan Singh, who you will remember, won the award for the best performance by an actor in last year’s Drama Festival, and has won high praise for his performances in “Lady Precious Stream” and “Kismet” both produced by Joseph Clement.

Joseph Clement’s successful production of the Chinese play The Singing Maid for last year’s Drama Festival showed that he has a knack for finding unusual and exciting theatrical fare. Now he has discovered a Chinese detective thriller, Murder Will Speak, by Michael Hutton Squire, which he is presenting at the National Theatre this month.

The central character in this play is Judge Dee, the Chinese equivalent of Sherlock Holmes, and this part will be played by Harbhajan Singh, who won the award for the best individual performance by an actor in last year’s Drama Festival.

The play is based on the Ti Kung An, an authentic Chinese detective novel written in the 18th century and translated by Dr. R. H. Van Gulik, former Netherlands Embassy Counsellor in China, who gave his invaluable advice in the writing of the play. Murder Will Speak was first presented at the Birmingham Repertory, and immediately after the Nairobi production it will be produced by companies at The Hague and in the New York.

Seeing that the cast of “Murder Will Speak!” which opened last night at the National Theatre, is Asian, somebody asked me whether the play is performed in English! The answer is of course that it is. This is a group trained by Joseph Clement which has put on several highly successful productions since 1952 when they opened the Three Oriental Plays. Later they presented “Lady Precious Stream” which was an outstanding success, and “Kismet” which gave Harbhajan Singh the long and difficult part of Hajj the beggar. Last year they produced the “Singing Maid” in the Drama Festival, and came a good third in the Colony, with Harbhajan Singh winning the award for the best performance by an actor.

Several of the present cast have been in every one of these productions, notably Prexy Pinto, who earned high praise for her performance as Mrs. Wang in “Lady Precious Stream” and S. L. Bhandari who played the Emperor of Japan in “The Singing Maid”.Rasik Patel, Ram Maini and Sapal Wankadia, all of whom play important parts in this play are new comers, but I am told that they are giving quite remarkable performances in this play. Three death masks are use in this play, but one is shattered every performance Carl Michaels has had to make thirteen death masks for the eleven performances which are being given.

If you missed “Murder Will Speak” last week you missed not only a good show but also the best staging yet seen at the National Theatre. Gorgeous in colour and ingenious in conception, it would have done credit to any theatre. The dresses, carefully designed and created from original drawings of the Manchu period were equally attractive, and with the sensational masks and the attention to detail throughout, contributed very largely to the success of the production.

Joseph Clement has a gift for choosing unusual and suitable plays for the Teacher Training College Dramatic Society, which he directs. The first show directed by him in 1952 was a promising beginning, but the difference in the quality of acting and the confidence of the cast between then and now is immeasurable. Here every actor revealed “stage sense” and a feeling for theatre.

The play, a Chinese detective thriller by Michael Hutton Squire, with the traditional character of Judge Dee as the central figure, gave them scope: it is an unusual, exciting and intelligent play. The interpretation by this group failed only occasionally – not enough to spoil a good production. The second act is long and called for more variety in tone and speed; and at the end of the last scene, when it transpired that the ghost had not been impersonated, there should have been a terrific dramatic impact, but instead this moment fell flat.

The play stands or fails, however, by the actor who takes the role of Judge Dee and in this Harbhajan Singh did not fail. He was urbane, wise, strong, kindly, as required, considerably aided by his excellent voice and delivery.

As the old peasant woman, Prexy Pinto quickly won sympathy in a most appealing performance, spoiled only by the fact that her speech was a little muffled in her headdress on occasion. Evelyn D’Souza was strong and convincing as the embittered widow and Sapal Wankadia made an excellent contrast as her weak and frightened lover. Rasik Patel was very sure of himself as the dignified Sergeant and has particularly clear speech: Husein Khatri made an industrious Scribe while the two Policemen formerly actors (Yashpal Ohry and Jitendra Shah) proved how important their early training could be to a career of detection. S. L. Bhandarai and Ram Maini acquitted themselves well, but especial mention must be made to Sidney Lewis as the Undertaker – a delightful little
performance!
E. K.

WHEN I heard that I was to do a notice of Murder Will Speak a Chinese detective thriller presented at the National Theatre by Joseph Clement, I was full of daft ideas about scathing references to “Velly Nice Play” a Chink in the production and “Confucius he say, ‘the play’s the thing wherein I’ll catch the conscience of the King’” and that sort of thing.

This time, I thought in presenting a Chinese play with an Indian cast, produced by a European, Mr. Clement had gone too far. I took my seat in a spirit of considerable levity, but from the minute they rang up the curtain I began to eat humble chop suey.

Mr. Clement has produced a play that can be enjoyed, a cast that can be heard, a setting which is a thing of considerable effect and beauty, and an amateur actor who can be put among the Kenya stars.

The latter is Harbhajan Singh, who plays the involved marathon part of Judge Dee. He does so with dignity, with polish and in my view, with brilliance. This is not an easy play either to produce or to act, but Mr. Clement and his cast and the enthusiastic team who created the magnificent scenery made Murder Will Speak a memorable evening for the Kenya stage and particularly for the National Theatre, which has seen so much that is shoddy and common place.

I note that the play was first produced at the Birmingham Repertory Theatre, home of the incomparable Barry Jackson, and Mr. Clement did well to draw his inspiration from this source. The programme explains that the T. T. C. Dramatic Society is a group of actors assembled from among the students and ex-students of the Teacher Training College, Nairobi. The aim of the Society is to present unusual and worthwhile plays suitable for performance by an Asian cast. It is hoped to give Nairobi audiences entertainment of a kind which they would otherwise have little chance of seeing, and at the same time fulfill a vital educational function.

Murder Will Speak, a case of adultery and murder set in the Manchu period, the solving of both crimes by Judge Dee, apparently by a forerunner of the immortal Charlie Chan, is certainly unusual entertainment and worthwhile, and to a qualified degree perhaps educational. So Mr. Clement, go and sit among the Mandarins at the theatrical feast of the lanterns.

+ - The thriller that really thrilled

From his first dramatic entry in the Teacher Training College production “Murder Will Speak”, at the Kenya National Theatre, Harbhajan Singh completely dominated the stage and proved once again – as if proof were needed – that he is one of the first character actors in our midst. His onerous part as “Judge Dee” called for acting of a high order, to which he rose without difficulty.

Your critic saw the first performance and was most impressed by the fact that prompts were almost non-existent – a very real tribute to Harbhajan Singh, who had ten times as many lines to speak as any other character in the play, and whose powers of retention must be remarkable. Rasik Patel as “Sergeant Hoong” gave a well-balanced performance, ably supporting the “Judge” in his role as an assistant to the master-detective. He played his part in the right key, neither detracting from the importance of the principle character, nor yet over-playing. Of the other characters, Sidney Lewis as “Tao, the undertaker” was in his brief appearance, outstandingly good, whilst Husein Khatri as “The Scribe” did all that was required of him. 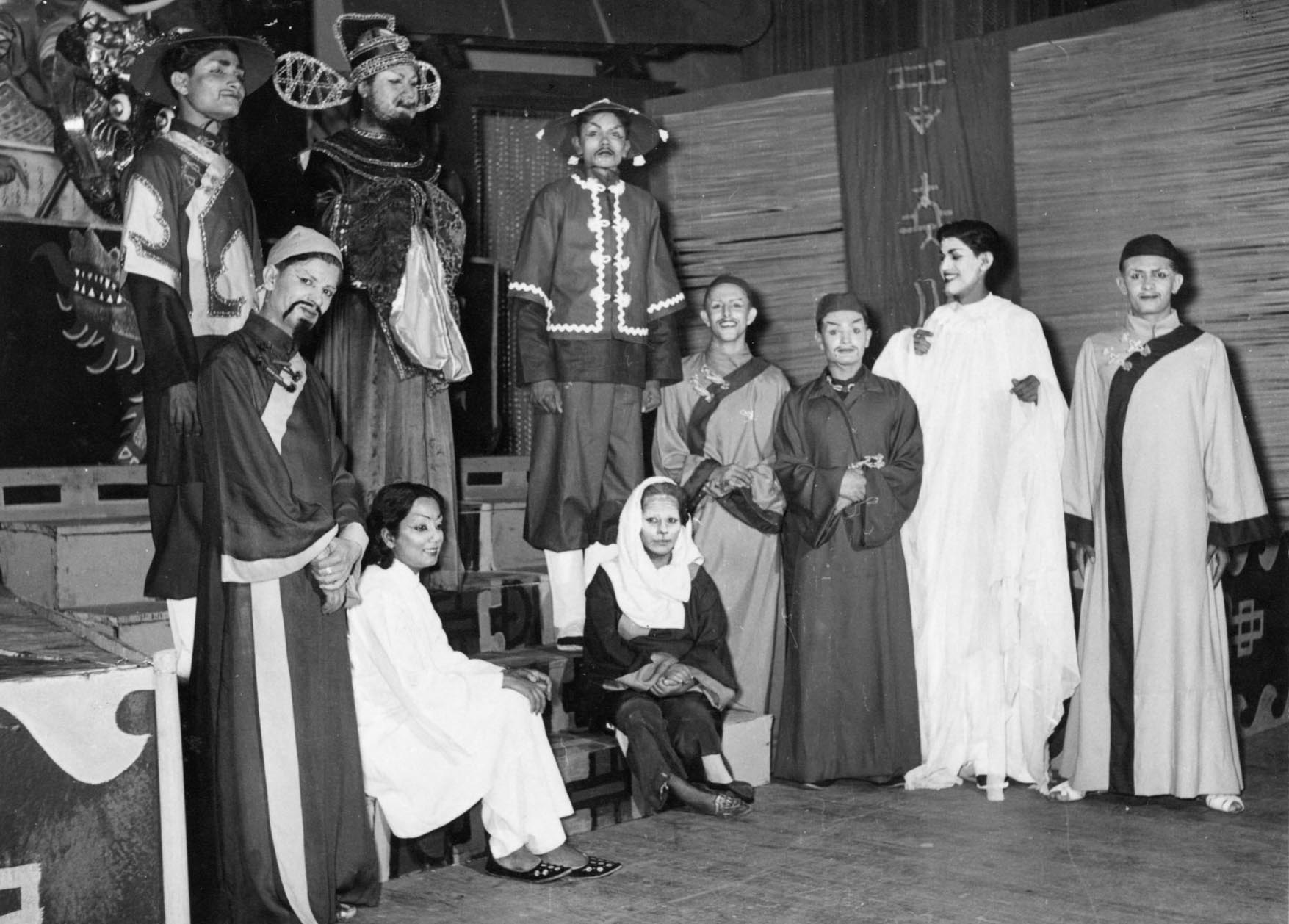 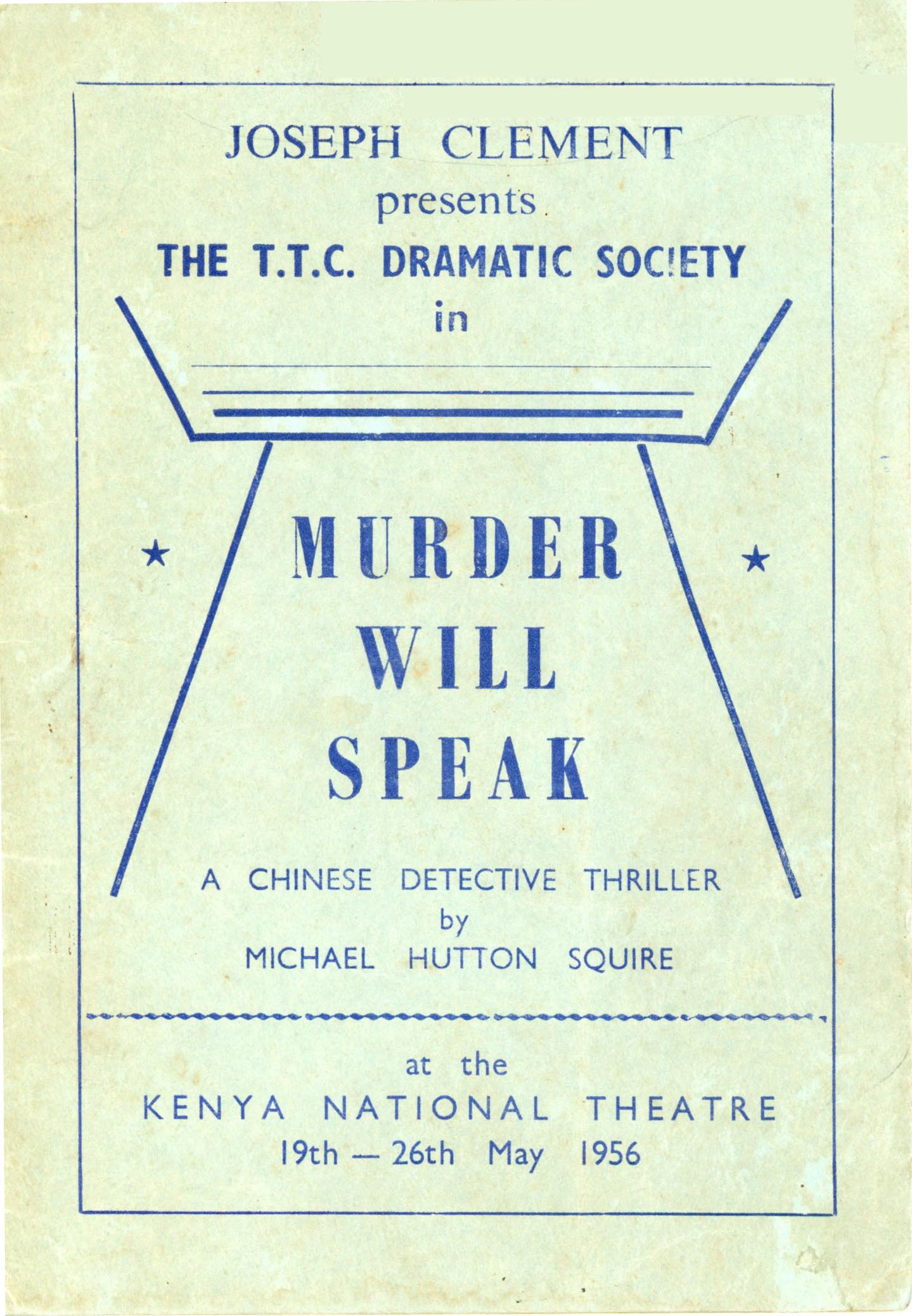 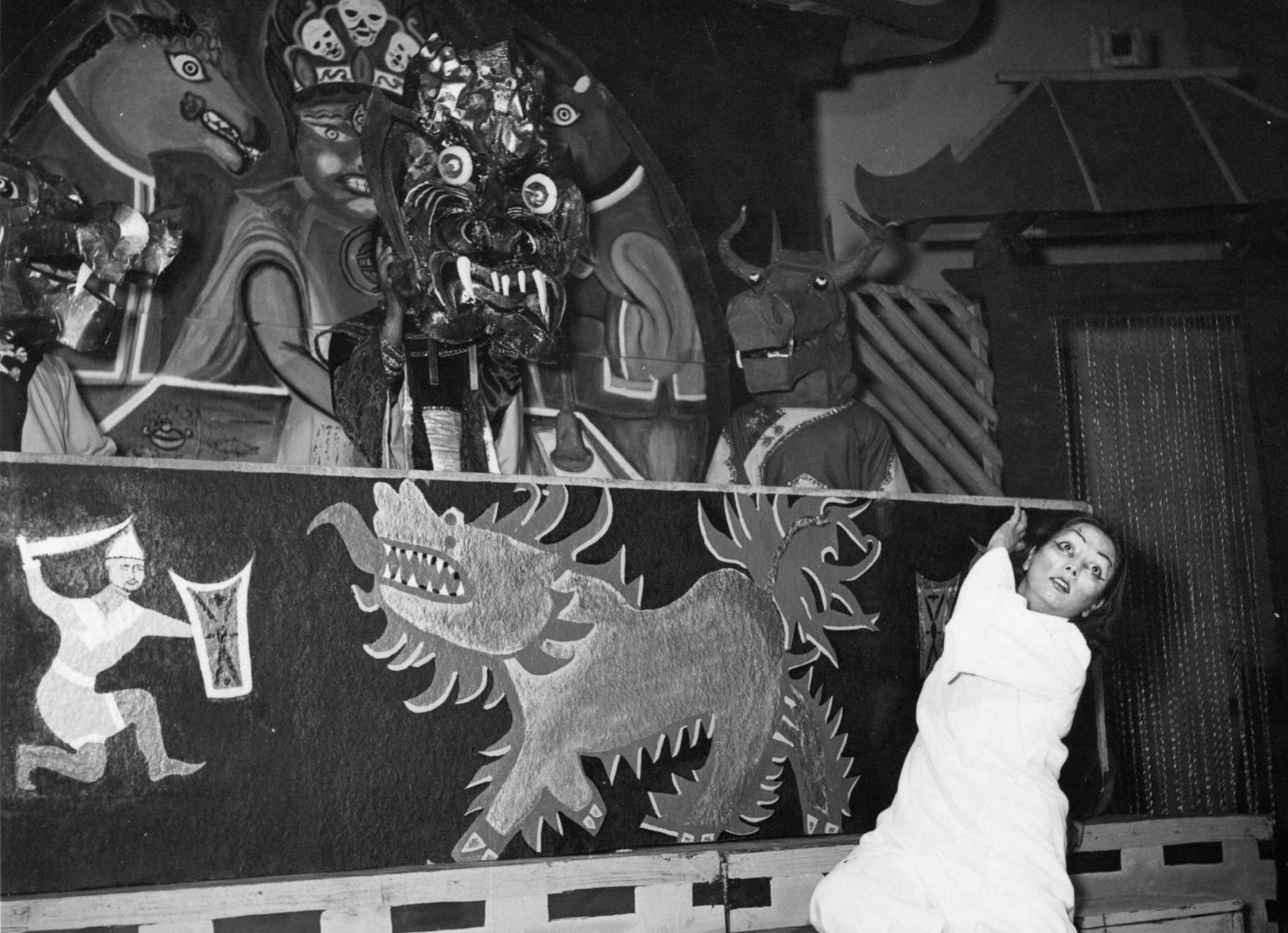 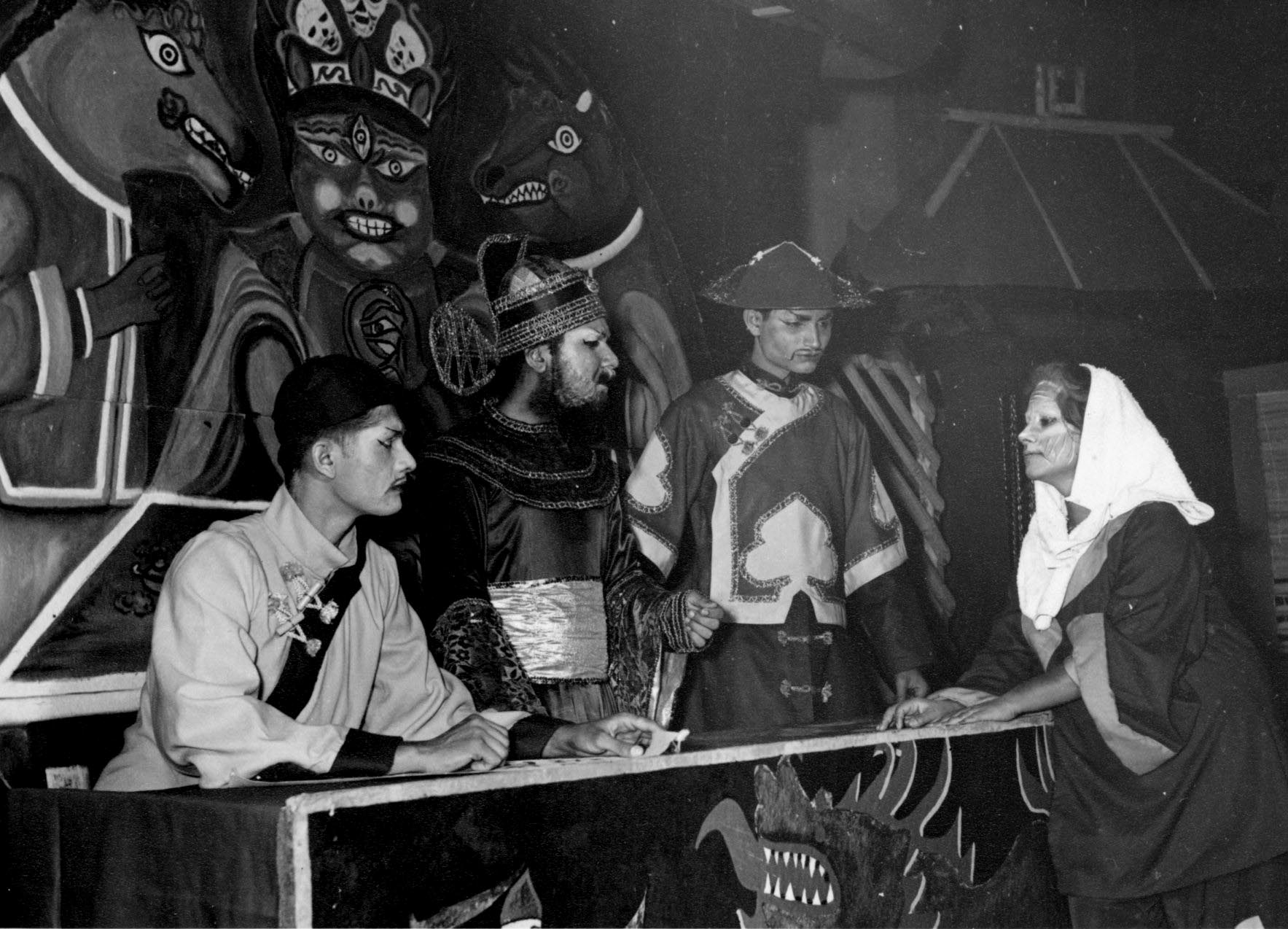 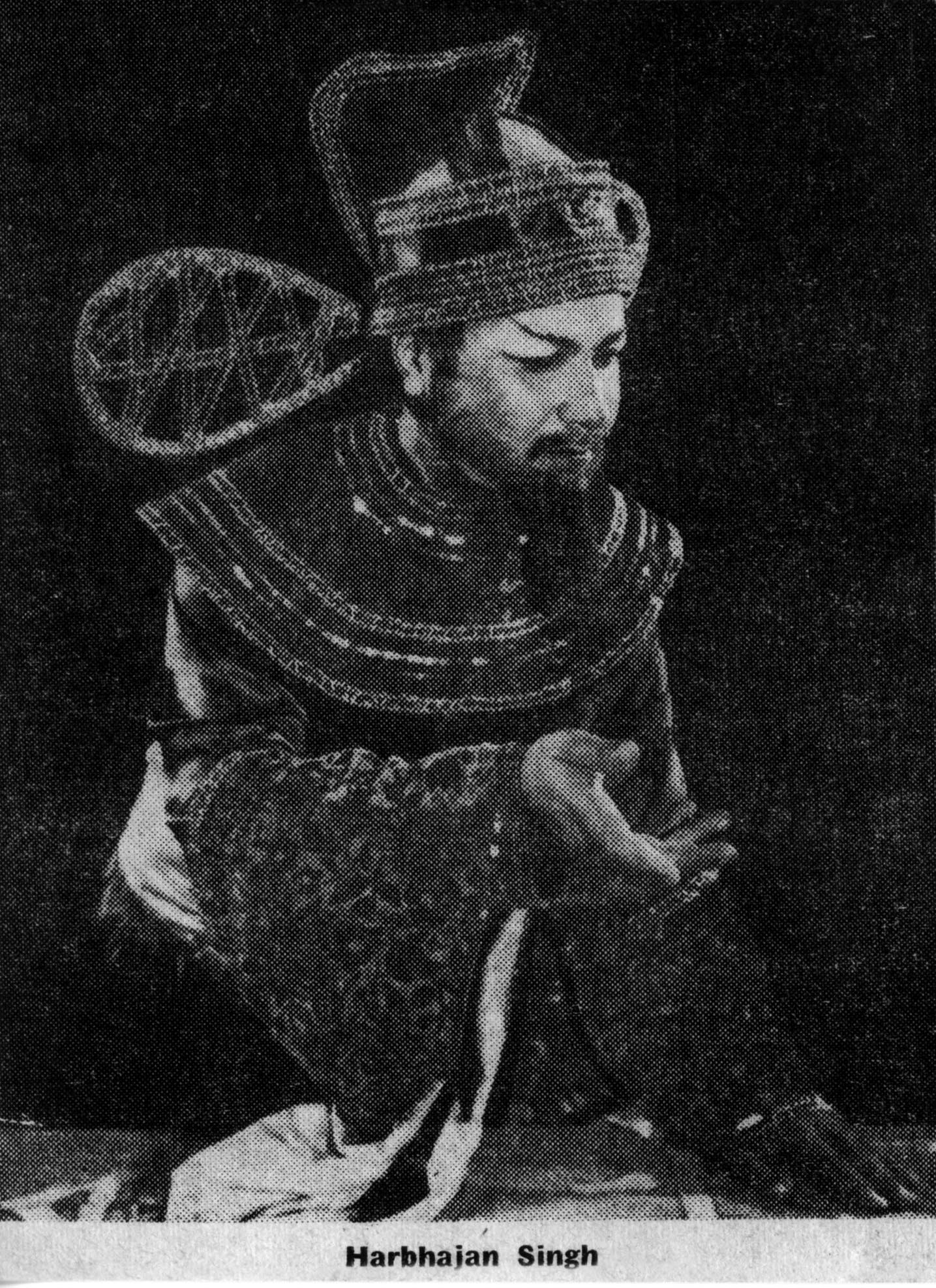 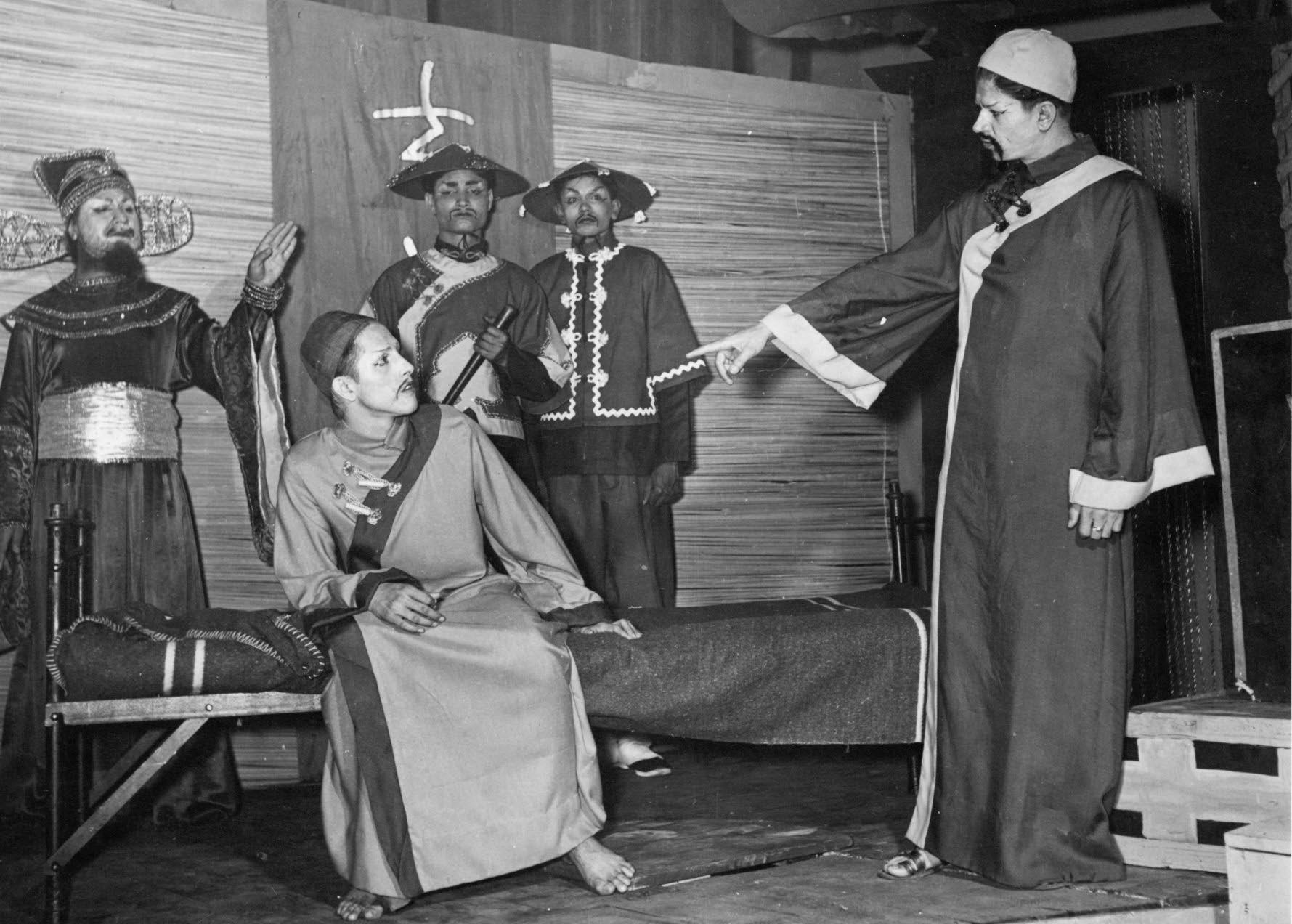 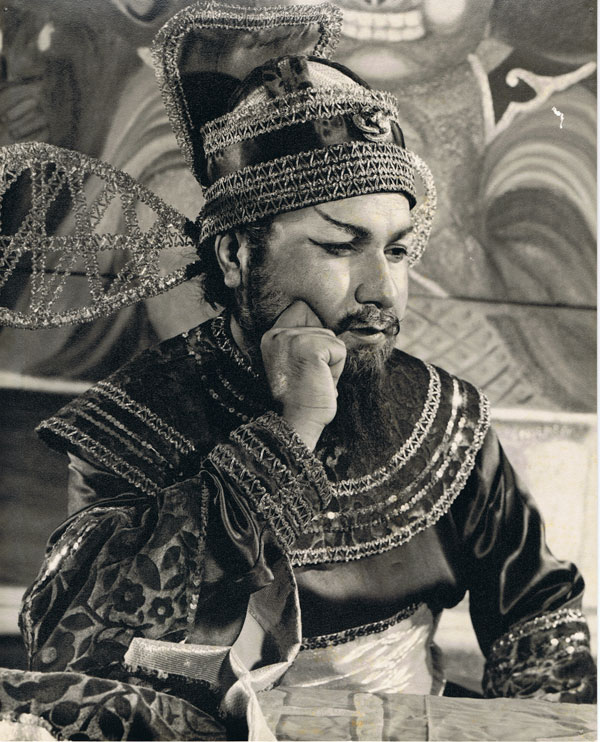