Mr. Harbhajan Preet a well-known man of the theatre is leaving this country for good. Mr. Preet was very active in fifties on the Nairobi stage; he emerged as one of the ablest pupils of Joe Clement who was busy bringing a kind of regeneration in theatre through the talent tapped from teachers training colleges. Mr. Preet even in those days when Europeans had very low opinion of “Babu’s” English”, managed to win best actor’s award twice, facing stiff challenge from the “continental” counter-parts. He subsequently appeared in “Hassan”, “Kismet” and many other plays.

In the next two decades, in his own words, he remained dormant. His stay in Mombasa, Wajir, and again in Mombasa was quiet. He bounced back in 1973, when on my personal coaxing, he agreed to direct Shiv Kumar’s “Loona”. Staging of this play marks the beginning of Panjabi-theatre in Kenya which bloomed into Panjabi Plays Festival concluded successfully at the Kenya National Theatre last weekend.

Preet remains a thorough gentleman and a consummate artiste. His rendering of a monologue from Christopher Marlow’s “Doctor Faustus” at the farewell party at Kenya Cultural Centre last Sunday, was a great tour de force. Only point of remorse is that he is leaving and his absence from Nairobi stage was rather too long and less tantalising. I wish him creative and artistic fulfillment in his new life in U.K. and elsewhere.

Harbhajan Singh Preet, who needs no introduction in local theatre circles, is leaving Kenya, to settle in England. During his stay in Kenya Mr. Preet has done much to bolster the status of Asian theatre and groomed many local artistes. He was very active in the Fifties on the Nairobi stage after emerging as one of the ablest pupils of Joe Clement who was then busy bringing about a regeneration in theatre life through talent tapped from teacher training colleges throughout Kenya. In the face of some stiff competition from the predominantly European theatre enthusiasts, Mr. Preet twice won the “Best Actor’s Award” and subsequently appeared in a number of English plays including Hassan and Kismet.

In his own words, he became rather dormant in the Sixties and Seventies after being transferred to Mombasa, to Wajir and then back to Mombasa. He bounced back into his own when he undertook to direct Shiv Kumar’s play called Loona. The staging of this play marked the birth of Punjabi theatre in Kenya. Those who know Preet will always remember him as a thorough gentleman and a consummate artiste.

At a farewell party for him at the Kenya Cultural Centre recently, Preet provided the tour de force for the evening by his rendition of a monologue from Christopher Marlowe’s Doctor Faustus. On behalf of the many lovers of Asian theatre in Kenya I take this opportunity of saying Kwaheri and Bon voyage. 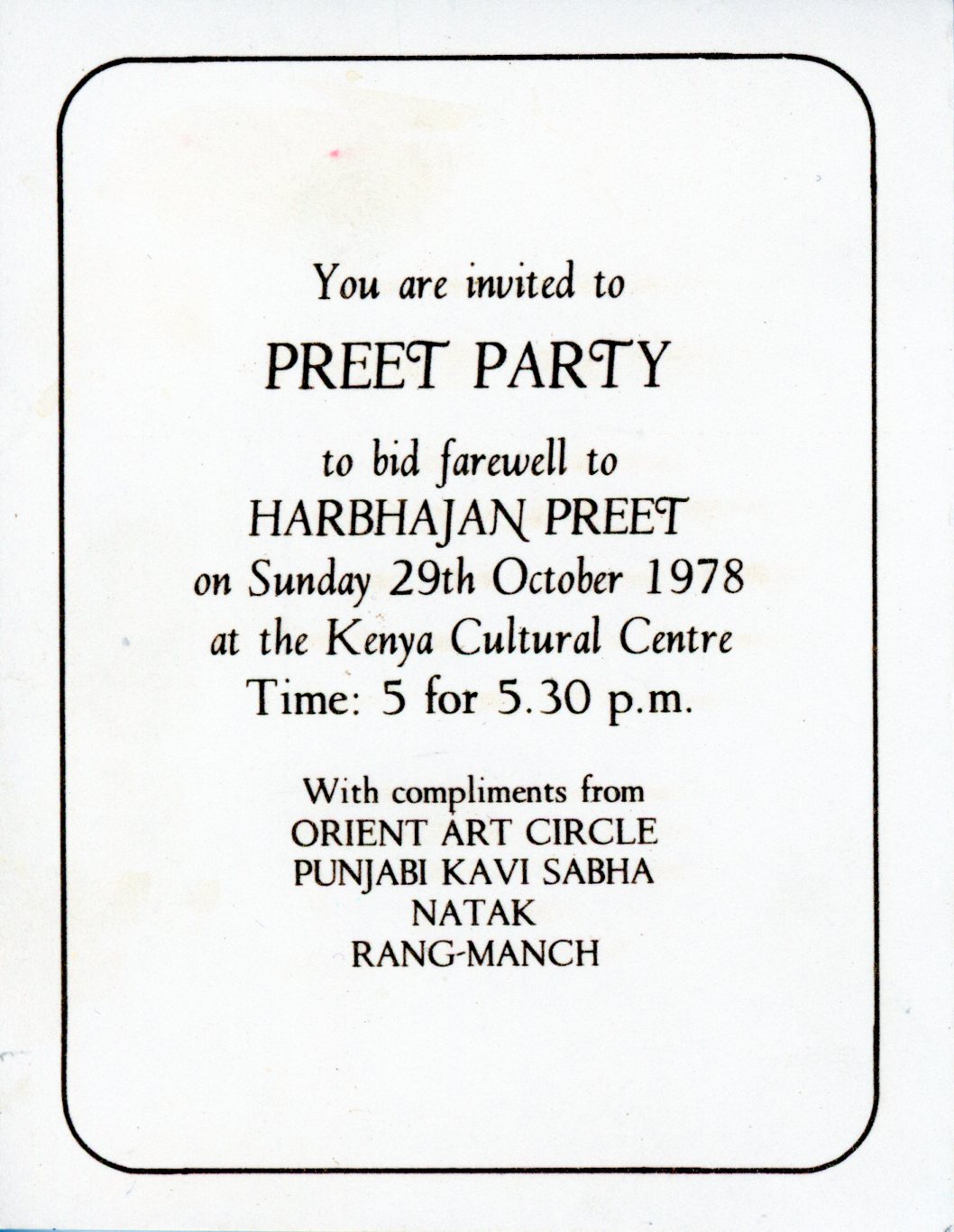