Playing the part of the Prime Minister, Wang Yun in Joe Clement’s production of Lady Precious Stream at the National Theatre next week – is Habhajan Singh who is photographed below. He is an ex-student of Mr Clement’s and has played a large number of parts in vernacular plays, particularly over the Nairobi radio. He was chosen for this part because of his uncommon sense of character, and as Wang Yun he has ample scope for characterisation and comedy.

Opposite him as Madame Wang is Presey Pinto, who is well known to Goan audiences for her acting in the Goan Gymkhana productions. While a student at the Teacher Training College, Nairobi, Mrs Pinto wrote a History of the Theatre in Nairobi which gave a very comprehensive picture of the development of the drama here.

Mrs Pinto’s part in the present production is that of the ideal Chinse wife who “by obeying her father when young, her husband when married and her children when a mother,” learns how to control them all!

This play is being performed as nearly as possible in the traditional Chinese manner. An Honourable Reader, played by Burjor Billimoria, introduces Western audiences to the mysteries of Chinese theatre. Mr Billimoria will be remembered for his performance as the Prime Minister in the Donovan Maule Production, His Excellency. He is currently rehearsing for James Master’s Coronation Festival Production of Henry VIII.

The proceeds of Lady Precious Stream are to be devoted to helping the Teacher Training Centre to acquire much needed books and equipment and to the fund for the victims of the Lari massacre.

+ - This precious play! By “Citizen” Reporter

In presenting “Lady Precious Stream” to Nairobi audiences this week Mr Joseph Clement has succeeded in raising the cultural level of Asian amateur acting in Kenya to new heights.

He is to be warmly congratulated on a notable production and on the talent of the actors and actresses who were selected for this play by a Chinse author for they showed that it is possible to present dramatic fare without falseness.

Audiences in the National Theatre who had the privilege of witnessing “Lady Precious Stream” and following her tribulations along the course of true love had the rare treat of seeing a delightful fantasy with unusual music – punctuated with the clanging of gongs – imaginary horsemen and all the childlike and bland make-believe of Celestial acting against a charming décor. The costumes were breath-taking in their lovely magnificence and the diction of the players – albeit a trifle stilted and clipped in some instances reached a high level of audibility.

Mr Clement himself was responsible for the design of the “sets”, the most striking being that of the “Willow Pattern” china plates, and Mr R T McNeil, Mr Kanwaljit Singh and Mr Sewa Singh for their tasteful execution.

Of the comely lady players taking part Evelyn D’Souza in the principal female role; Angela Fonseca as the pert second daughter of Wang Yan and Molly Verghese as the tempestuous Princess of the Western Regions were outstandingly good. Of the men Yashpal Ohry, the Minister of many ‘affairs’; Olimpio Carvalho, the humble gardener who rose to be a Prince but never forgot his lady love even after 18 years of wanderings abroad and the two sons-in-law of the Prime Minister – Dilbagh Singh, the Dragon General Mehboob Qureshi, the tiger general and Harbhajan Singh as ‘His Excellency’ gave capable renderings of their respective parts, which included amusing ‘asides’ not on the acting script.

Joseph Clement has already made his mark in Nairobi for his production of plays in English performed by Asian casts. His latest – Lady Precious Stream now running at the Kenya National Theatre sets that mark at a new height. Mr. Clement wisely realised the dangers of trying to present plays in a tradition foreign to his cast, but native to many of his audience. He seeks instead to find a piece which will make enjoyable theatre for his mixed audience, without the danger of falseness. Lady Precious Stream, a Chinese play by S. I. Hsiung, fills the bill.

The conventions of the Chinse theatre are very different from those now accepted in the West. Few Western playwrights have ventured to make the audience so much part of the action; to have the confiding story-teller who explains what is going on, and links up the development; to set out so frankly to achieve an air of unreality.

A play of this type provides Western theatre-goers with a novel and interesting experience. To me, the elaborate opening introduction of all the characters dragged, but with that past, the play settled down to be an enjoyable comedy.

The story is a simple fairy tale. The daughter of the Prime Minister leaves her rich family to live in poverty with the man she loves. She remains faithful during his long absence at wars, and all ends happily when he returns, ruler of a vast conquered kingdom.

It is a triumph of the women of the cast. There can have been few more attractive female casts seen in Nairobi, and all the best performances come from them. Angela Fonseca scores in the title role – equally convincing as the girl her father knows to be a “wilful minx,” as the humble wife waiting in her hovel till her husband returns, and finally as his queen.

Prexy Pinto must rank as number two. As the wife of the Prime Minister, she epitomises the obedient wife, who is diplomat enough to run a statesman’s household – and get her own way. Molly Verghese gave a swashbuckling performance. She swept the stage as the flirtatious but martial Princess of the Western Regions, giving an air of rampant regality at all times.

Evelyn D’Souza and Reina Ferrao were inevitably slightly overshadowed as Precious Stream’s sisters, but they could never be overlooked.

Olimpio Carvalho makes Hsieh Ping-Kuei, the poor man who wins the love of Precious Stream, a noble figure from the start. Harbhajan Singh gives a robust reading of the Prime Minister, and others who gave convincing performances were Dilbagh Singh, Mehboob Qureshi and Burjor Billimoria – the last as The Honourable Reader, somewhat aloof, but then he knows what is happening all the time, and what is going to happen.

One of the most vivid memories of this production is the magnificent costuming and attractive décor, which
incidentally is merely decoration for the stage, and not “sets” as they are known to Western audiences. Much is owed to those responsible for the costumes, and to Mr. R. T. McNeil, the stage manager, who executed the décor, and was responsible for the many properties.

Proceeds from the production go to Red Cross Funds.

Superb elegance – that is the pleasure to be savoured and enjoyed at the Kenya National Theatre, where a dazzling cast is performing S. I. Hsiung’s “LADY PRECIOUS STREAM”. It is a traditional Chinese play, well-mounted, excellently staged and well-acted almost throughout. The Chinese Drama “in setting, plot and technique differs in many respects from that given on the stage of Western countries. The Chinse theatre is not realistic and its technique is essentially conventional. Imaginary horses, make-believe doors and steps, the property men with their boxes of unusual properties and the refreshment of the players in full view of the audience are conventions decidedly novel to the English theatre-goer.” These are some of the elements in the Chinse drama on which the public are fed. They also show the Chinese as a profoundly emotional people with a weakness for sentimental plots.

Even supposing the play is of small account, yet an all-round display of style achieved with such sureness of technique and taste is a delight in itself. How gloriously Madam Wang part, played by Mrs. Prexy Pinto, speaks to her daughters and sons-in-law, how boldly precious Stream, Angela Fonseca, the heroine, unfolds her statements of social principle! How superbly Wang Yun, the Prime Minister as played by Harbhajan Singh, Silver Stream by Reina Ferrao, Su by Dilbagh Singh and Her Royal Highness, the Princess of the Western Regions by Molly Varghese execute their parts.

These are only the principals in this comedy where every part is perfectly in keeping and the producer, Mr. Joseph Clement, has kept them each in place. He has done all round an almost perfect job and deserves congratulations along with his colleagues.

In a play like this, it is difficult if not impossible, to comment on every character of importance. Mr. Olimpio Carvalho as Hsieh Ping-Kuei gave a most lively performance. Angela Fonseca has many merits, but does not really suit the difficult part allotted to her. Mrs. Prexy Pinto was most impressive as she has that natural gift to act as a mother. She has obviously worked hard and cleverly with her part. 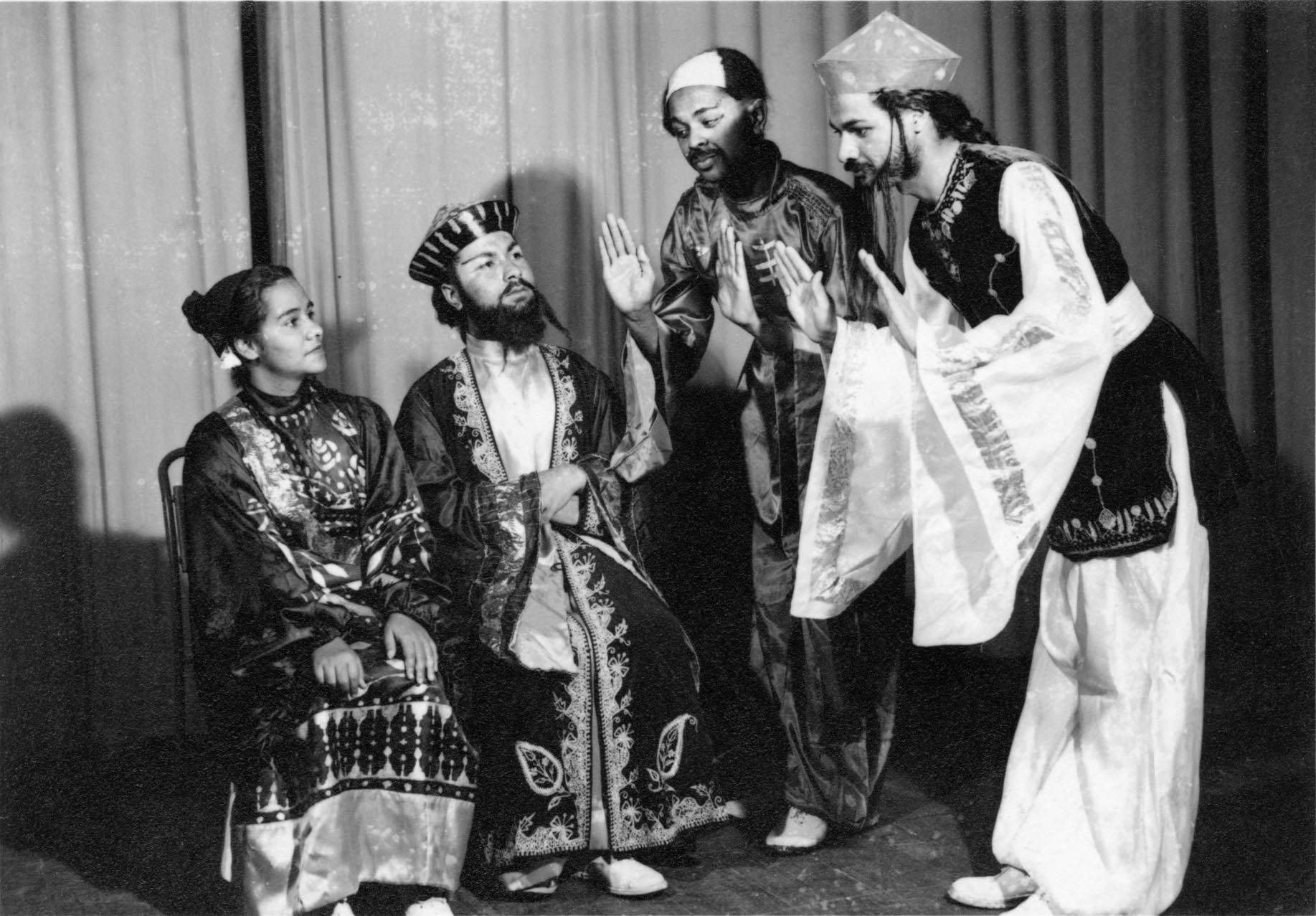 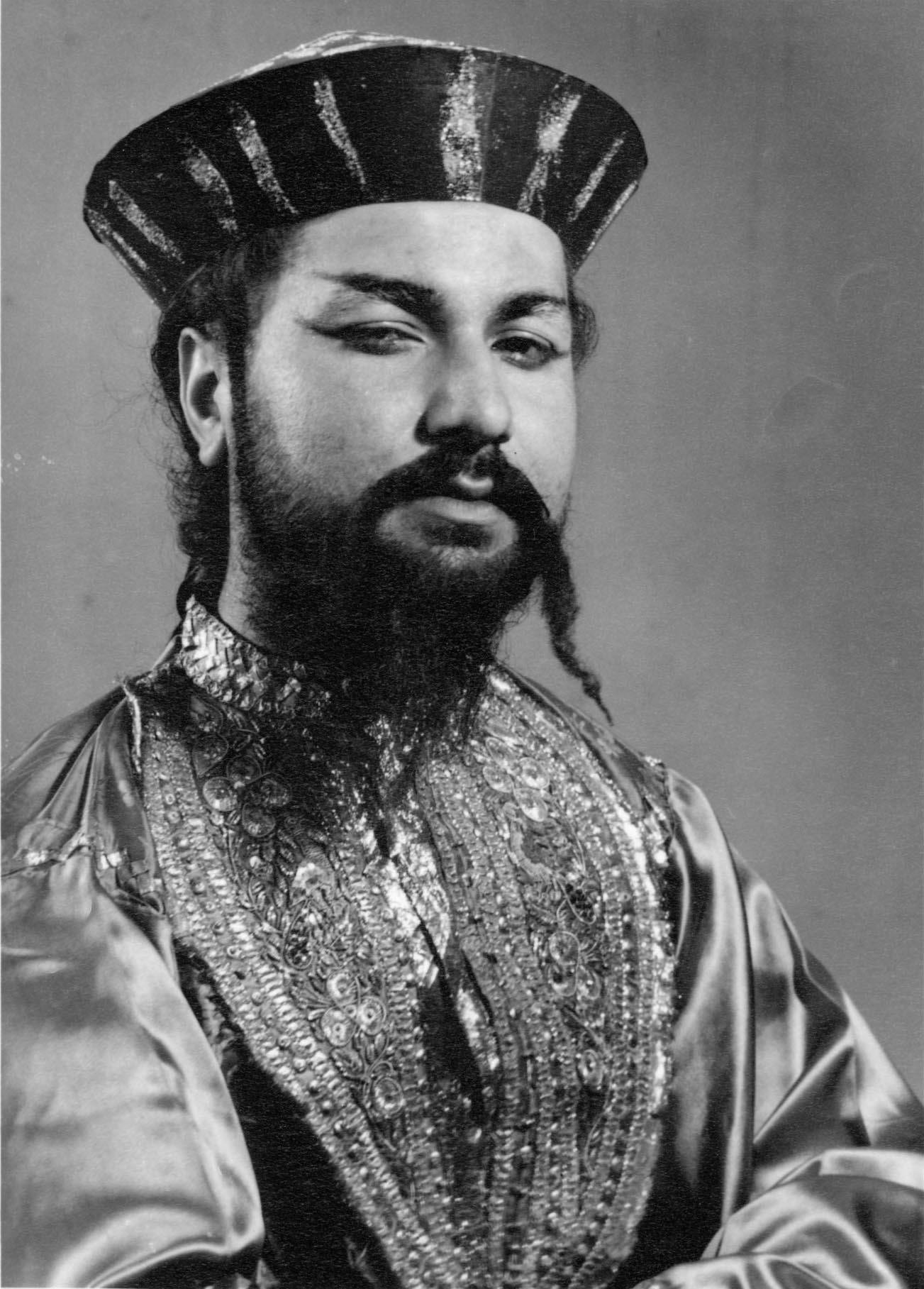 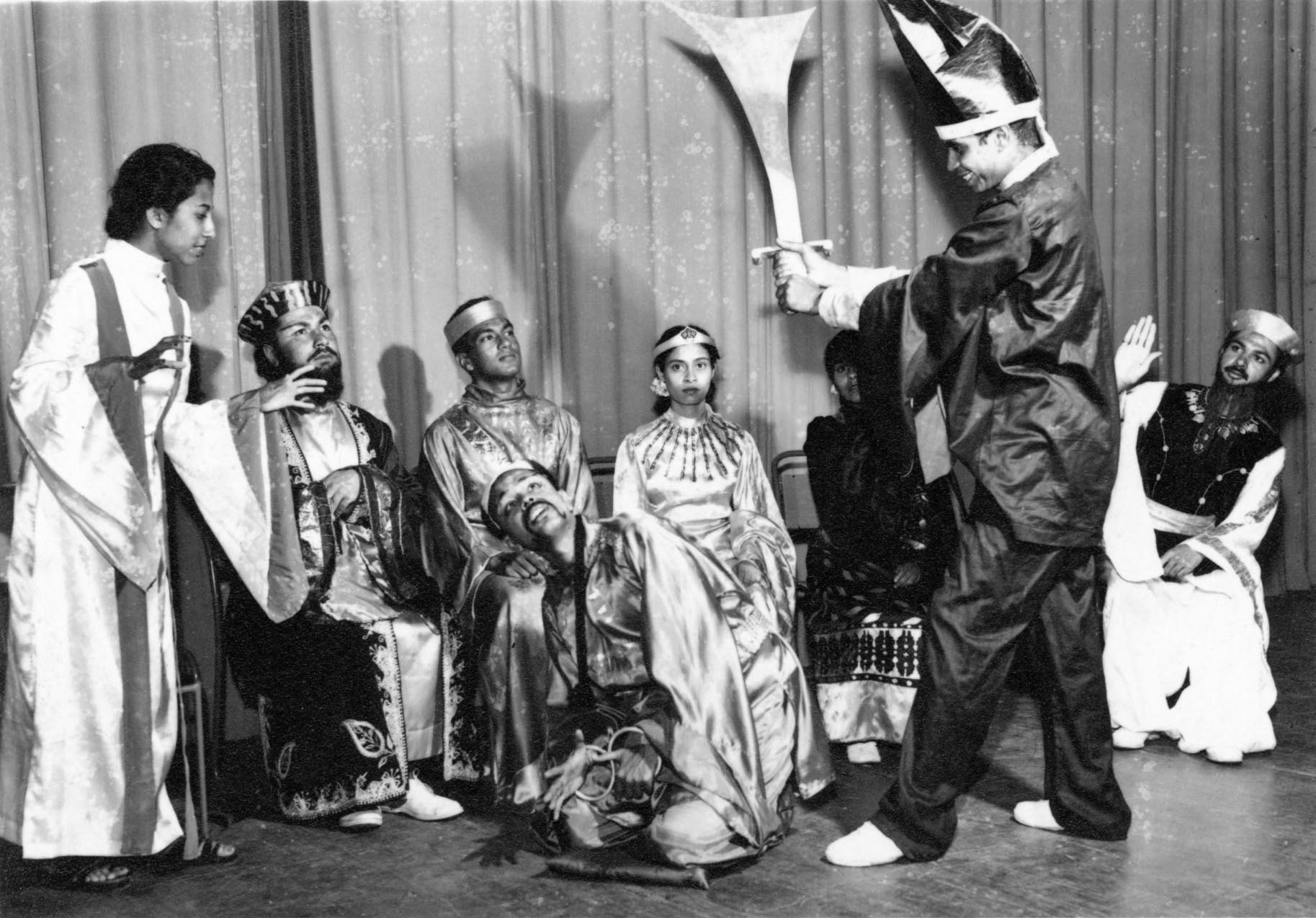 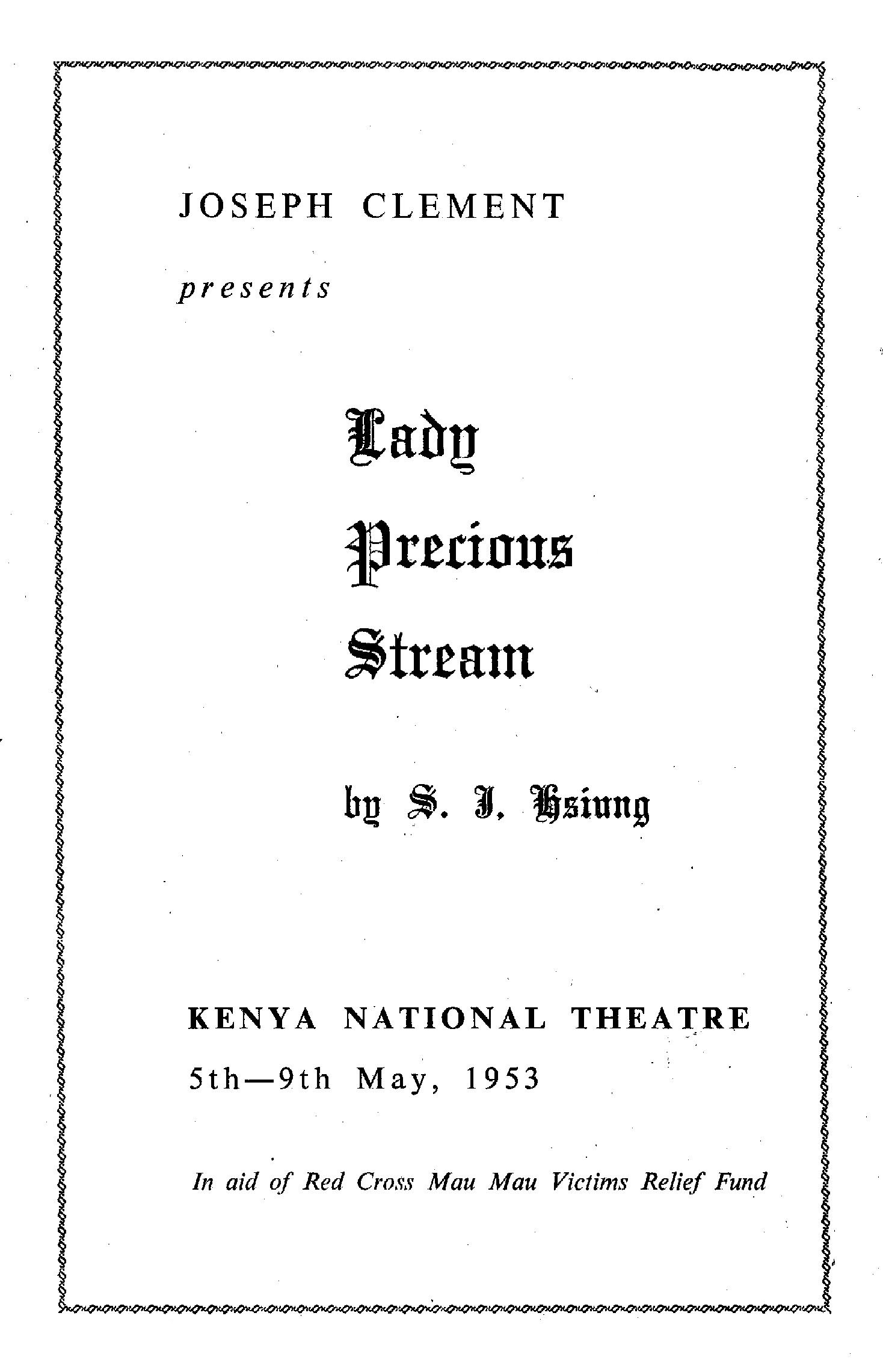